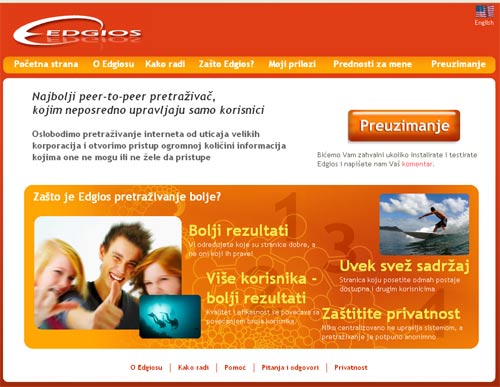 Distributed search engine concept is not new, I read some posts about this approach to Web search four years ago, and my opinion about it that it is very interesting concept regarding breaking the monopoles in search engines industry by using p2p technology as the search platform, instead of proprietary web crawlers, thousands of SE’s servers, etc. But, I did not read aboutÂ some successful p2p SE’s in any mainstream media, nor blogs. Will Edgios.comÂ be the breaker ofÂ that? Maybe!

One of not very often told stories about Google.com success starts in 1994, when a group of college students start to use search engine prototype, later known as Google. Until 1999 Google user base was pretty big, those persons used Google for several years, and that was the greatest capital of Google success. Believe it, or not.

Edgios.com is in Alpha phase, and there is still not a lot of users, which means that search results areÂ not very good at the moment. You have to install software that watch your web surfing, which means that all of your security software will be alarmed. You have to trust them that it is anonymous, that they have strictly privacy rules… And, there will be a lot of issues related to Web users who are not in the position to change the security rules of the computers they use (e.g. large networks of computers). But, it works.

It is in test phase, and I think that better design is needed, but for now it is not so important.

Edgios is a US company, based in Palo Alto, CA. The company is backed by Draper Fisher Jurvetson (DFJ), a premier Venture Capital firm based in Menlo Park, CA. DFJ shares with Edgios a passion for distributed computing, having backed Skype (as well as Baidu.com), the most successful P2P startup to date. If they can engage the Skype user baseÂ in some way, then…

I would like to see p2p SE’sÂ as the competition of Google. Do you?